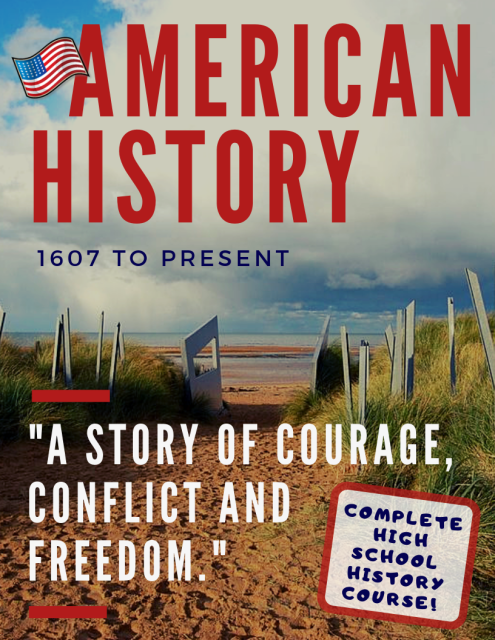 Complete Course - "A Story of Courage, Conflict and Freedom"

This is the complete version of the course. Includes: full-color workbook and accompanying digital resources.

This high school course is specifically designed from a Christian perspective for home school education! "While creation confirms the existence of God, History reveals the need for a Savior." Check out the sample file download at the bottom entitled, "Christian Themes and Truths."

​Everything you need for high school American History is included in this purchase - student workbook, answer keys, guides, tests etc. The full color professionally produced workbook contains instructions on how to access digital resources from Google Drive. These digital resources are needed to complete the course and are included in the purchase!

​ This course (1607 to 2016) is proven to help students learn about America's exciting history and has been developed and used by an experienced high school teacher. The course is a great fit for grade 10 and 11 students in most states.

- The full color workbook contains 243 pages of learning! Plus, there are over 150 files (powerpoints and answer keys) free to access from Google Drive (instructions within workbook)! Scroll through the sample workbook at the bottom of the page.

- Thematic packages included: The Original Colonies, Life in the Colonies, the Road to Revolution, the American Revolution, the Antebellum Period, the Civil War, Post-Civil War America, America at the Turn of the Century, the Great War, the Roaring Twenties, the Great Depression, World War Two, the Cold War, the Civil Rights Era, Conflict and Crisis, Towards the New Millennium and A New America Emerges. See samples at the bottom of the page.

- Access to interactive Google quizzes for each of the course activity packages.

- Introductory activities including, “The American Dream in Real Life.”

The course will explore the development of the United States as a nation from colonial times to the present. This story includes the courage showed by the early explorers and the colonists who persevered through extreme hardship with hard work and faith in their God. As the American nation grew, more immigrants were drawn to the promise of the American Dream. Although many were able to benefit from the fruits of their labors, others people groups, like African slaves and Native Americans, struggled under hardship. A new national identity began to be formed, ultimately, coming into conflict with the British hierarchy. Following independence, the new American nation would expand from sea to sea, but also divide from North to South culminating in the Civil War. New freedoms were ensured, but the wounds of the nation would take time to heal. The new century would be one in which America emerged from its isolationist shell to play a large role in world affairs. Throughout each of these events, Christianity has played an integral role in the development of the nation and will continue to influence the future course of the United States.

Scroll through a sample of the workbook below and also the sample file downloads! ​

Don't forget to check out the course review here!